Last year I wrote a post about tracking down two pieces of art by Karel Lek, which were done in 1952. These were discovered to be still with the artist, after being in storage for over 60 years. The National Football Museum was able to purchase both of these as part of The Art of Football project and they have been framed and are now on display on level 1 of the museum – so come on down and see them if you can!

in Rain’, I asked Karel if he would be open to being interviewed so I could find out more about the inspiration behind these two works.  Karel kindly agreed, so two of my colleagues – David (Digital Learning Coordinator) and Louise (Age Friendly Programme Officer) – and I drove to lovely Anglesey for the day.

We interviewed Karel at the Oriel Tegfryn Gallery on the Menai Bridge (where many of Karel’s works are exhibited and for sale) to find out more about his life, his art, and his interest in football.  Karel actually said he wasn’t interested in the players or the matches as such, but was fascinated by the spectators and the crowds. This seems to be the case for many football related artworks – as often it is the fans depicted which says a lot about how much they bring to the game.

Karel really was the most lovely and interesting chap, I wanted to stay all day and talk to him (he was also a champion for managing to sit for so long on the stools we were sat on)! It was a pleasure to meet the person behind the artworks which are now in the permanent museum collection – and we think that the interview will add another layer of interpretation to the pieces. Karel was excited that these artworks were coming to the National Football Museum – and he even spoke to the North Wales Chronicle about it! 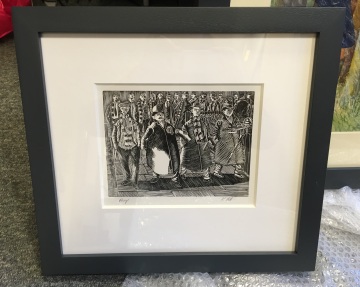 ‘Off to the Match’ framed and ready to display

‘Football Spectators in Rain’ framed and ready to display

Karel has, of course, been invited to visit the museum and see his work on display – so I hope that we will be able to see him again soon!

PS: Some of the remaining woodcut prints (from an edition of only 30) are soon to be available to purchase through the museum. If interested, please contact 0161 871 8150 or email the shop – shop@nationalfootballmuseum.com.